Whilst your IBD journey is your own, there are many people around you who can provide care and support. 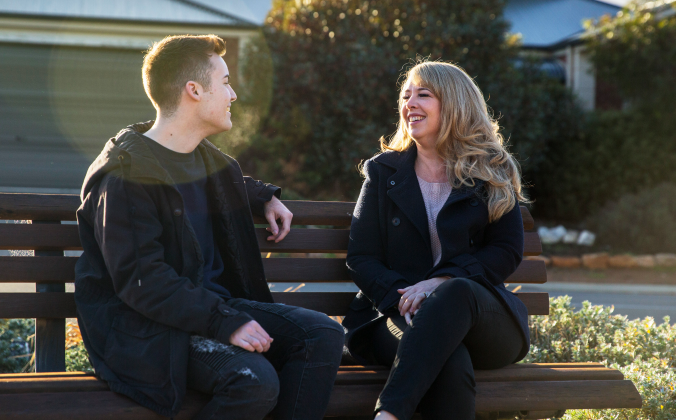 There are a number of healthcare practitioners you may want to consult with, or may be put in touch with by your General Practitioner.

Who are the healthcare professionals that will manage my IBD?

What is the typical patient flow from GP to IBD specialist?

How can my gastroenterologist help me with my condition?

How can a psychologist help me with my condition?

A life-long condition means you need to be proactive with managing your health (especially your diet and stress levels) and take steps to ensure that your lifestyle supports healing and encourages periods of remission (absence of symptoms).

Finding a community of individuals living with similar health conditions can be extraordinarily valuable for people with life-long condition. There are people out there who have gone through what you are experiencing – the fear, the pain, the discomfort and awkwardness. Furthermore, with experience comes knowledge.

Having a group or just a few experienced individuals you can turn to for support can make your condition feel more manageable.

If you’re just beginning your IBD journey, or you’ve been going through it solo for a while, consider reaching out for support.

While IBD may sometimes be referred to as an ‘invisible’ disease, there is a strong community of sufferers out there ready to share their experiences and support others.

While the anonymity may initially feel a little strange, many online forums are a great place to chat to like-minded people (even though most people don’t meet face-to-face). In fact, being anonymous has its benefits. You can chat about uncomfortable details or ask embarrassing questions without feeling judged.

Online forums are also great for people living in rural and remote communities where a face-to-face support group might not be available. There are loads of online forums out there catering to different niches (diagnoses, age groups, lifestyles, etc.) A simple Google search for your condition and “online forum” or “message board” will point you in the right direction.

Meeting face-to-face with people who share your diagnosis and symptoms can be extremely comforting for some people. Support groups do exactly as their name suggests – offer support to people. This means that while seeking support from the group, you will also be providing it to group members. Support groups can be great places for sharing knowledge and discussing anxiety in a trusting, safe environment without fear of judgement.

These groups are especially useful for parents of children with IBD who often experience anxiety, frustration and fear about their child’s illness, their part in caring for their child and concerns regarding how their child will adjust to the lifestyle changes required to manage the condition.

Illness-specific health organisations such as Crohn’s and Colitis Australia are excellent resources for information and support. They are dedicated to raising awareness of IBD as well as fundraising and are a knowledge hub for people and their families. These can be excellent starting points when trying to reach out to peers.

They can assist by referring you to a local support group as well as providing you with expert information and answers to FAQs. They also have events and fundraising activities, which may give you the opportunity to mingle with other people affected by IBD.

There are plenty of examples of active, talented people living with IBD who’ve simply refused to let their condition get in the way of their dreams. We’ve picked some of the most high-profile examples to show you that the sky is always the limit. These are but a few of the countless others who have made IBD work around their life.

Arguably the world’s most famous contemporary magician, Dynamo was diagnosed with Crohn’s disease at 15. Dynamo, whose real name is Steven Frayne, began studying magic in his teens and believes that the process helped him stay positive and occupied during times of poor health. Speaking to the press in 2013, the world-famous illusionist commented: “Being really unwell when you’re young can be very isolating, not to mention boring.”

He’s since gone on to star in several TV specials, perform for Jay Z and dazzle millions of people around the world with a unique talent.

She’s sold over 20 million albums and dominated the charts with #1 singles. People across the world know Anastacia for her incredible voice, but few know she was diagnosed with Crohn’s disease when she was just 13 years old.

This diagnosis never stopped ‘the little lady with the big voice’ from having a stunning career that few singer-songwriters could match. She’s spent the last two decades touring the globe, maintaining a busy schedule of performing and recording as well as embarking on a number of charity projects to help raise much-needed funds for HIV and breast cancer research.

Following her career breakthrough on the legendary Beverly Hills 90210, Shannen Doherty became a fan favourite with her demon-slaying sisters on Charmed. If the life of an actress wasn’t already demanding enough, Shannen has had to manage her Crohn’s disease throughout much of her career. With a life full of rehearsals, lengthy production schedules and magazine photo shoots, Shannen’s success shows that a glamourous Hollywood life and IBD are not mutually exclusive.

Luke Escombe is an award-winning singer-songwriter, comedian and presenter whose has used his experience living with Crohn’s disease for twenty five years into the inspiration for his art and career. At the 2011 Melbourne Comedy Festival Luke shared ‘Chronic’ his take on health issues which has catapulted his popularity and career presenting around the world. Luke is a proud ambassador for Crohn's and Colitis Australia and the winner of a 2017 WEGO Health Award in the category of "Hilarious Patient Leader".

Perhaps better known as Mr Beast, an American Youtube personality famous for his videos of expensive stunts and philanthropy shared his personal story of being diagnosed with Crohn’s Disease as a teenager in April 2015. Jimmy explains two of the hardest things about living with Crohn’s disease is “No one knows you have it, because they can’t see it and no one knows what Crohn’s disease is, so they don’t understand it.” Jimmy has over 46 million subscribers to his You Tube channel and has raised over $22million in philanthropic work for #Team Trees and the American Arbor Day Foundation.

Caring for someone with IBD

An inflammatory bowel disease (IBD) diagnosis can be a bit of an emotional rollercoaster ride – for the person, their family, and their partner.

As with all relationships, communication and trust are the keys to growth, particularly true if your partner is living with IBD. If your partner or spouse is diagnosed with IBD, it is important to make an educated and concerted effort to support and respect them, as this can be their greatest ally on their IBD journey.

They may not want to discuss it

It is not uncommon for people to experience feelings of anger, embarrassment, sadness, denial or confusion following their diagnosis. It can take time for individuals to work through these feelings on a personal level, to know where they stand and how they feel about their condition.

At first, as your partner confronts these issues, they may need some time and space to move through their feelings on their own before they feel ready or confident enough to discuss their condition with you. Give them the time and space they need.

The power of knowledge

If your partner isn’t ready or feels uncomfortable discussing their IBD openly, that doesn’t mean you need to stay in the dark. If the communication thing really isn’t flying just yet (it is ok, these things take time), then education is your best fall back.

Talk to doctors, see a counsellor, do some research online. This is your chance to learn about the symptoms of IBD and what you and your partner might expect in terms of changes to your lifestyle. Research can also shed light on the psychological implications of living with a life-long illness.

Families and carers of those with IBD can also reach out to support groups, health organisations and online forums for knowledge and comfort. In these safe spaces, families and carers can feel comfortable asking some of the hard questions, sharing their concerns and seeking advice about supporting their loved one during flare ups.

It is not uncommon for partners and family members to experience a sense of frustration, fear and uncertainty. Doing your research and speaking with healthcare professionals can put you in a better frame of mind to support your partner.